Russian Student Makes Way to Highland Ivan Baida is like many guys who grew up having a dream of playing big-time basketball.  The only difference is that Baida grew up in Tver, Russia, where basketball is not a big sport.  To play big-time basketball, he knew he needed to come to A... read more »

Highland Football Falls To Iowa Western The #2 ranked Iowa Western Reivers continued their dominance of the Highland Community College football team as the Scotties just couldn’t get their offense going on Saturday and fell at home by the final of 41-0.  After a first half being un... read more »

Highland Business Club to Commemorate 9/11 Members of the Highland Community College Business Club will be commemorating those who lost their lives in the attacks on the United States on September 11, 2001.  The Club will be hosting small receptions in the lobby of the Communications/Tec... read more »

Highland Officials Planning Homecoming 2014 Homecoming planning is well under way at Highland Community College as the College prepares to honor its Golden Graduates of 1964.   HCC Homecoming 2014 will be on Saturday October 11 when the Scotties will host the Tritons of Iowa Central... read more » 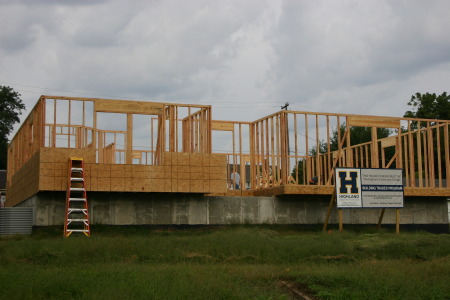 Building Trades House Going Up in Highland Once the decision was made by Highland Community College officials to move the Building Trades program from Atchison to Highland, those officials began looking for a building site to construct the next house.  Every year, the program builds a ho... read more »

Highland Program Receives Walmart Grant For the last two years, Kim Bechtold, the Transfer Advisor for the Student Support Services program at Highland Community College, has sought support from the Walmart Foundation for activities conducted by the program.  And she has been successful.... read more »