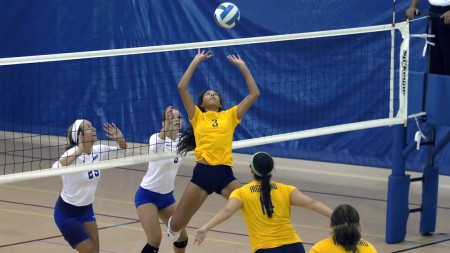 After earning the primary setter position early in the 2017 season, Katie Pearson's (Kansas City, MO) freshman season has kicked off on a high note as she received Kansas Jayhawk Community College Conference Setter of the week for DII Week 2.

Pearson (Kansas City, MO) is currently third in the KJCCC East for assists per set (9.41) and total assists (320). She had an exceptional weekend at the Highland Volleyball Tournament, totaling 160 sets and 46 digs in four matches; 61 of those sets in a five set thriller against #18 MCC-Longview. "I was very impressed with Katie's decision making skills and she ran the offense I was expecting,” commented Head Coach Jon Bingesser after the Scotties’ 3-1 performance over the weekend.

In the three-set victory over Independence on Wednesday, Coach Bingesser expressed his thoughts on Pearson's performance, "Her ability to find the girls who are ready to perform is great. We have team members who are solid in their own way, and with Katie’s ability to recognize who are the ones we need to find, we were able to halt Independence on all of their runs."

Pearson not only leads the team in assists and assists per set, she is third in digs (102) and digs per set (3.00) and fourth in total blocks with 14.