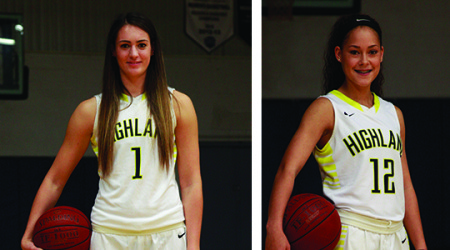 Two members of the Highland Community College women’s basketball team have been recognized as National Player of the Week in successive weeks.  First, forward Szonja Vukov, a freshman from Hungary, earned the honor last week.  This week, freshman guard Shaiann Tramble of Shawnee, OK, is the NJCAA National Player of the Week.  The Scottie women, coached by BJ Smith and Jillian Palan, are ranked sixth in the nation.

Last week, Vukov had two double doubles (scoring and rebounds in double figures), the tenth and eleventh times she has done that this season. When the Scotties, then ranked seventh, hosted KCK, then ranked sixth, Vukov almost had a triple double (double figures in scoring, assists, and rebounds) – she was one assist short --22 points, 10 rebounds, and nine assists along with seven steals to lead her teammates to a win that vaulted them to the number six national ranking.  In the second game of the week, she had 12 points and 11 rebounds in the Scottie victory at Labette Community College.

This week, Tramble averaged 17 points per game, with four assists and four rebounds. In games against Brown Mackie and Fort Scott, Tramble had 14 and 20 points, the most she has scored as a collegian.  In the week, her scoring included 17 of 18 free-throws.