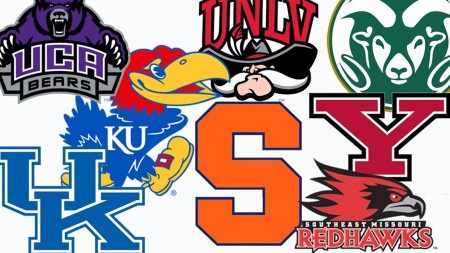 Phil Hoskins, a defensive end from Toledo, OH, signed with the University of Kentucky. Hoskins played in 2015 and red-shirted due to injury in 2016. Hoskins recorded four sacks for a loss of 25 yards in 2015.

Yet another defensive end, Tyler Sims from Columbia, SC, signed with Youngstown State University. YSU was the FCS National Runner-up in 2016. Sims was second in the KJCCC in sack yards with 81 on 6.5 sacks in 2016. He averaged 4.3 tackles per/game with the Scotties.


Jim Philistin, Palm Beach, FL, inked with the University of Central Arkansas. Philistin averaged 4.2 tackles per/game in 2016 and recorded 4.5 sacks. His best game came against National Champion Garden City as he had 11 tackles in that game.

Antonio Cole, Edmond, OK, signed with the University of Kansas and will be joining 2015 signee DeeIsaac Davis. Cole averaged 4.8 tackles per/game and recorded five interceptions; third in the KJCCC.

On the offensive side, three more Scotties signed to the Division I Level.

The NJCAA’s leading rusher in 2016 is headed to Southeast Missouri State University. Marquis Terry, the KJCCC Player of the Year, 1st Team All-American, 1st Team All-KJCCC, and Highland standout, signed his papers and is headed to Division I. Terry led the nation in rushing yards this season with 1,319, averaging 119.9 yards per/game and scored 17 touchdowns in 2016.

Demarre Kitt, Atlanta, GA, is headed to Colorado State. Kitt was also a 1st Team All-KJCCC selection in 2016. Kitt led the KJCCC in yards per catch at 16.8 in 2016 and was second in receiving touchdowns with seven. He finished with 687 receiving yards last season.

Jamal Wooten, Kansas City, is headed to Southeast Missouri State and will continue to block for his running back Terry, who also signed with the Division I Red Hawks. Wooten earned 2nd Team All-KJCCC at the fullback position in 2016.

Head Coach Aaron Arnold on this year's signing class: "I am very proud of all of these guys. They have worked so hard on the field and in the classroom, and I'm so happy to get to see them accomplish their dreams. My favorite thing about this group was just how great they were to be around – they are all great examples of what we want our players to be like. They are all going to be very successful at the next level, and more importantly, they will be successful in life."

There are still a handful of Scotties with visits lined up and decisions to make for their next step in their athletic and academic careers.