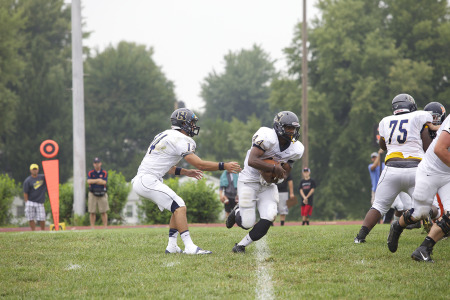 In one of the biggest wins in Highland Community College football history, the Scotties used a late touchdown pass to defeat the #4 ranked Butler County Grizzlies on the road by the final of 23-21. In his second year as head coach of the Scotties, Ryan Held – who came to Highland from Butler where he was the offensive coordinator – had been seeking a signature win on which to show the improvements made in the Highland program.  He got that win on Saturday.

The Scotties stuck first in the third quarter following an interception by sophomore Brandon Lockwood (Largo, FL) that gave the ball to Highland at the Butler 2-yard line. On their first play of the second half, freshman Brandon Peters (Mobile, AL) rushed for Highland’s second touchdown of the day and a commanding 17-0 lead. Unfortunately for Scottie fans, the next 26 minutes of play belonged to the team that had not lost a conference game since 2009. Butler scored twice in the third quarter and pulled into the lead in the fourth quarter to take a 21-17 lead late into the final stanza. With the ball and controlling the clock, Butler seemed to show that the Scottie luck had run out until a fumble with 3:33 left in the game turned the ball over at the Highland 23-yard line.

Highland freshman Brandon Bergeron (Lafayette, LA) showed why he won the starting quarterback position with his play over the final three minutes of play. Four times Bergeron converted on third down to keep the Scotties hopes alive, including a third and goal touchdown strike to sophomore Desmond McGee (Wichita) for the go-ahead score and victory.

Bergeron connected on 44 of 57 passes for 294 yards and the one touchdown. Sophomore Justin Dickey (Mulvane) caught six passes for 89 yards while sophomore Melvin McAdams (Houston, TX) caught a team-high nine passes for 62 yards. On the ground, Highland was led by Mitchell with 27 yards on 15 carries.

The Scotties next travel to Hutchinson Community College on Saturday, September 28. Kickoff is set for 7:00 p.m.