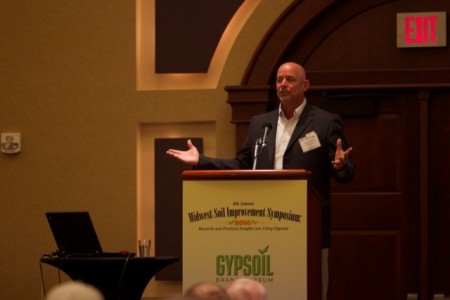 Tracy Streeter, Director of the Kansas Water Office (KWO) and an alumnus of Highland Community College, will be the keynote speaker at the 2016 commencement exercises at the College.  Highland commencement 2016 will be held on Friday, May 13 – how auspicious – at 7:00 on Kessinger Field.  In case of inclement weather, commencement will be held indoors in Allen Fieldhouse.

The Kansas Water Office is the state’s water planning, policy, and coordination agency.  Streeter has led that Office since 2004 and was re-appointed by Governor Sam Brownback on December 31, 2010.  He served previously for Governors’ Kathleen Sebelius and Mark Parkinson.  Before joining KWO, he served as Executive Director of the State Conservation Commission. Streeter has 30 years of experience in Kansas water resources management.

In addition, Streeter serves as Chair of the Governor’s Drought Response Team and Western States Water Council.  In 2013, he was appointed by the Governor to co-lead the development of a 50 Year Water Vision for Kansas along with the Kansas Secretary of Agriculture.

A native Kansan, Streeter grew up on a diversified family farm in Brown County and graduated from Horton High School.  He attended Highland Community College in 1981-82 and earned an associate’s degree. While at Highland, he played defensive back on the Scottie football team.

After graduating from Highland, Streeter transferred to Missouri Western State University and obtained Bachelor of Science degrees in Agriculture and Agriculture Economics.  He later earned a Master of Public Administration degree from the University of Kansas

Streeter and his wife Denise live in Valley Falls where she serves as City Administrator.  They have been married for 26 years and have two children, Mitchell and Morgan, who are 2015 graduates of Pittsburg State and Kansas State University.  Streeter served eight years on the Valley Falls Board of Education and is a private pilot.