Walter Yost, accomplished artist and teacher was committed to sharing his artistic skills and education with others.

Born on the same farm on which he lived southwest of Atchison, Kansas, Mr. Yost attended Atchison schools and graduated from the University of Kansas with a Bachelor of Fine Arts degree in 1939.  He spent the next two years painting 12 murals for the University's Museum of Natural History before returning to his family's home to engage in farming.

From 1945 to 1967, Mr. Yost taught art classes at Atchison Junior-Senior High School.  He then joined Highland Community College in Highland, Kansas, serving as chairman of its art department until retiring from full time teaching in 1977.  As professor emeritus, he continued to teach on a part-time basis at Highland Community College until 1982.  Mr. Yost also taught art courses at Benedictine College, University of Kansas, Peru State College in Peru, Nebraska, and the U.S. Penitentiary in Leavenworth, Kansas.

In 1958, Mr. Yost received a Master of Fine Arts degree from the University of Kansas.  He has had many one-man exhibits throughout the United States and has received numerous honors, including first prize Kansas State Fair, 1955, and Kansas Artist of the Year in 1976.  He has over 500 paintings around the world, not to mention countless other art projects, including screen prints, leather-craft items and stained glass windows.  He additionally has done several book illustrations and written articles for various publications.

His devotion to educating people and helping them to see and appreciate the artistry in their environment earned Mr. Yost the respect and admiration of untold numbers of students, colleagues and fellow Kansans.  Some of his former students serve as heads of art departments across the country.  Mr. Yost's greatest pride was the accomplishments of his former students. 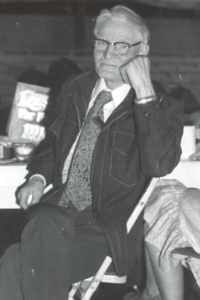