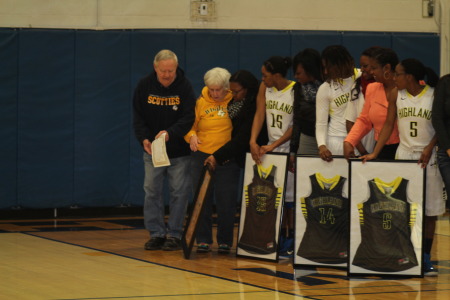 The Highland Community College women’s basketball team recently honored Jim and Barbara Rupe of Hiawatha for their support in the last few years.  During the final games of the regular season, the Rupes were called from the stands to join the women’s team on the floor, where the Scottie sophomores were being recognized.  The Rupes thought they were simply going to get the chance to visit with each of the sophomores.  That is when the team, coached by B.J. Smith and Jillian Palan, presented the Rupes with a signed Highland jersey in a frame.  Along with the jersey, the Rupes were given a certificate that read:

The Highland Community College women’s basketball team would like to show its appreciation to Jim and Barb Rupe for their support throughout our season.  Mr. and Mrs. Rupe have made us feel valued and special.  So many times before games – both at home and on the road -- to look up and see them in the stands brings a smile to our faces.  This jersey is our way of saying thank you for being part of our team.

Coach Smith noted that the Rupes have been very supportive of the Scottie women, attending all home games and most away games, missing only one away game this season.  “It just means so much to all of us to see the Rupes at the games.  Last year at the National Tournament, the Rupes were especially supportive of the team, so we wanted to be sure that they know how much we appreciate them.”