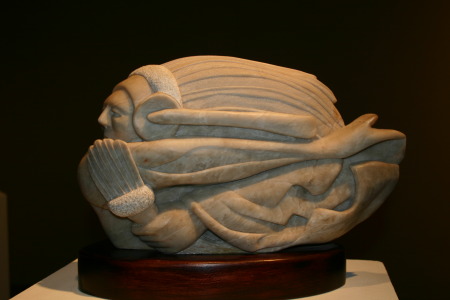 The artwork of Native American Reuben IronHorse-Kent will be on display in the Walter Yost Art Gallery from November 15 to December 15.  The Yost Gallery is on the campus of Highland Community College and is open to the public from 9:00 am to 4:00 pm each weekday.

IronHorse-Kent began learning about art in his culture when he began learning traditional bead working techniques passed down from his grandmother.  He developed an interest in art soon after, getting formal education from the Institute of American Indian Art in Santa Fe, NM, where he obtained an Associate in Fine Arts degree.

Photographs of his work have been included in several publications, including Creativity Is Our Tradition by the Institute of American Indian Arts, Native American Art by Robin Langley Sommer, and Hands In Clay, which is a college-level ceramics textbook.  While specializing primarily in clay, specifically a Japanese firing technique known as raku, he also enjoys other forms of artistic expression.