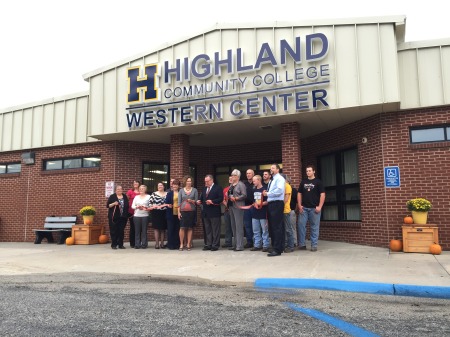 Highland Community College hosted a day-long series of events to mark the opening of its Western Center in Baileyville.  Highland President David Reist was joined by Western Center Director Cara Baker, Vice President for Academic Affairs Peggy Forsberg, and Vice President for Student Services Dr. Cheryl Rasmussen to not only have a ribbon-cutting ceremony, but also to host a steady stream of visitors throughout the day.  The day included a luncheon for area school district leaders who were a major part of the planning done for the coursework offerings at the new facility.

Dr. Rasmussen chaired a committee that included Forsberg which wrote a federal Title III grant which will be providing funds over the next three years for the Western Center operations.  The College purchased the former B & B High School and renovated it to provide technical education opportunities to students on the western side of its service area.  The facility now has a welding room in one of the former gyms, a diesel area, and renovated classrooms for other technical and general education courses.  Baker was hired from the Nemaha Central school district to direct the operations of the new Western Center.

Reist, who is a native of Bern, expressed his satisfaction with the opening of the College’s new facility.  “Ever since the merger with the Northeast Kansas Technical College in Atchison in 2008, we have been looking for ways to provide technical education on the western side of our service area.  The planets aligned as Dr. Rasmussen led a team to write a successful Title III grant and the B & B facility became available.  We are very pleased with the renovations done by AHRS, who we have worked with on other projects.  Now we are looking forward to working with our secondary education partners in this area to provide much-needed technical training for area businesses and farming operations.”