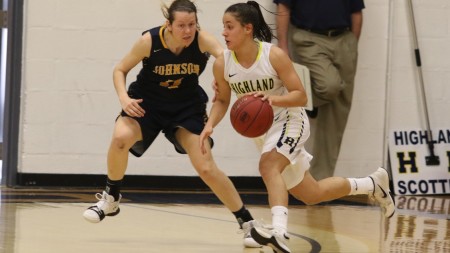 Niccolly Ramalho, of the Highland Community College women's basketball team, cleaned house this week, earning KJCCC Conference Player of the Week and NJCAA National Player of the Week honors. These awards come after Ramalho, a 5'5 sophomore guard from Brazil, helped lead her team to two top 10 wins last week, with wins over No. 7 Labette and No. 4 Johnson County, keeping a perfect 22-0 record, now 24-0.

During those games, Ramalho averaged 21.0 points per game, 6.0 rebounds per game, and 4.0 steals per game. She scored a career high 25 points against No. 4 ranked Johnson County, shooting 8-13 from the floor and 4-7 from behind the arc.

Ramalho leads the nation in steals with 102 and is 2nd in steals per game at 4.5. She is 4th in total assists at 124 and 8th in assists per game at 5.4. Shas posted five double-doubles this season and one triple-double.