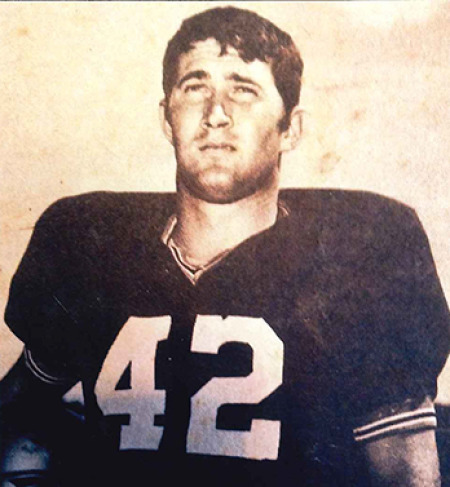 The Highland Community College Athletic Hall of Fame Committee is pleased to announce its 2014 candidate for induction in the Hall of Fame:  Paul Stanley Simmons.

Simmons came to Highland after graduating from Midway High School in 1965. He went on from Highland to receive his Bachelor’s degree from Fort Hays State University in 1969.  While at Highland, he participated in football, basketball, and track in 1965 and ’66 and helped win the Conference in football both years.

While at Fort Hays, Simmons was All-Conference in 1968; led the team in tackles, was All District 10, and was Honorable Mention NAIA Little All-American.  Paul also played baseball; he had a .380 batting average and chalked up three individual records.  In 1969, Paul was the 14th athlete to receive the Paul Busch Gross Award, which is given each year to the graduating athlete deemed most outstanding in scholarship, citizenship, leadership, and athletics at Fort Hays State.

Paul married Mary Miller Simmons in 1966. They have four children, Dave, Paula, Barry, and Tammy, and have six grandchildren.  In addition to farming, Paul owned and operated P&S Muffler & Radiator Shop in Hiawatha.  He retired in 2010, and loves spending time with his grandchildren, who are the light of his life.  Paul noted, “If I had it all to do over again, I wouldn’t change a thing!”

The 2014 Induction will take place on Saturday, September 13, in the Walters Wellness Center on the Highland campus.  Along with Simmons’ induction, a reception and recognition will be conducted of the 1984 Scottie football team which had the most wins in a season.

Activities will begin with registration at 9:30 am in the Walters Wellness Center.  Simmons’ induction will begin at 10:30, followed by the recognition of the 1984 football team and a luncheon at 11:30.  Those assembled will then convene in the Barber Room of the Scottie Stadium Center for a reception and to watch the Scotties as they host Iowa Western with a 1:00 kickoff on Kessinger Field.  Simmons and the ’84 team will then be recognized again at halftime on the field.

Those attending the Hall of Fame induction and recognition of the ’84 team in the Walters Wellness Center are encouraged to reserve the $6 luncheon tickets in advance by contacting Athletics Administrative Assistant Darla Tracy at 785.442.6040 or dtracy@highlandcc.edu.  Payment for the luncheon will be during the 9:30-10:30 registration in the Wellness Center on the morning of September 13.