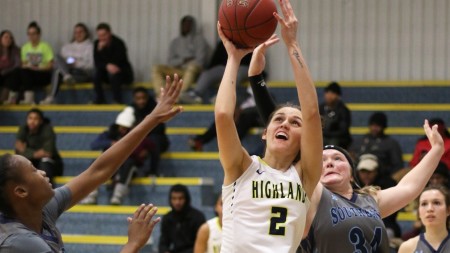 Mariane De Caravalho (SO, Brazil) not only led the team with 26 points, nine rebounds, five assists, and four steals; she sealed the title of the first Highland women's basketball player to score 1,000 points at Highland and is now the all-time scoring leader at Highland, surpassing last year’s record set by All-American Szonja Vukov.

Sophomore Niccolly Ramalho (SO, Brazil) put up big numbers on the Storm with nine points, nine assists, eight rebounds, and six steals, while teammate Blaize Burgess (SO, Topeka) dropped four threes and six assists on the game. Berniezha Tidwell (SO, Hot Springs, AR) stayed consistent for the Scotties, scoring 21 points and coming up with five steals.

The team out rebounded the Storm 51-29 and more than tripled their assist numbers, 32-6; 37 turnovers were forced and the Scotties doubled the field goal percentage, shooting 50% to the Storm’s 23%.

"You can’t learn to play hard for 40 minutes until you play hard for 40 minutes. These games when we're up a bunch, it’s about our conditioning level and our intensity. Intensity is something that you don't all of a sudden turn on, it’s something you have to build on. Going to Labette, the biggest game of the year so far next Wednesday, it will be a 40 minute intense game, and it will be a very physical contest. We have to step up and be more consistent with our effort," commented head coach BJ Smith after the win.

The #4 nationally ranked Highland Scotties (20-0) will travel to Parsons, KS, on Wednesday, January 24th to face their first Conference match-up of the year against the #9 Labette Cardinals (15-2) at 5:30 pm.