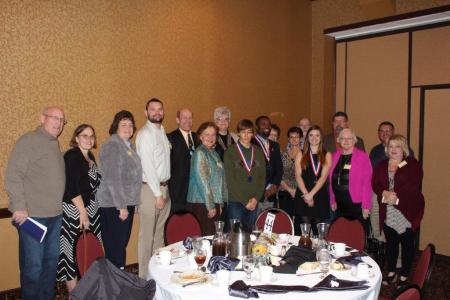 Three Highland Community College students joined 51 of their peers when Kansas saluted the 54 community college scholars for their academic accomplishments February 16 in Topeka during the Twenty-Second Annual Phi Theta Kappa Honors Luncheon. Representing the state's 19 community colleges and a technical college, these scholars were named to the 2017 All-Kansas Academic Team, sponsored by the international headquarters of Phi Theta Kappa International Honor Society, the Kansas Association of Community College Trustees, and the Kansas Council of Community College Presidents.

Highland’s PTK chapter is sponsored by faculty members Margy Heddens and Harry Moeller.  Under their leadership, the chapter has ascended from being a one-star chapter to a five-star chapter.  Two of the student award recipients are from the Highland campus – Taylor Cooper and Obinna Muoh – and one from the College’s Wamego Center – Arie Stenek – who is sponsored by JD Koons.

The Luncheon was held at the Ramada Inn Hotel in Topeka. Those in attendance included the scholars, members of their families, PTK chapter sponsors, community college administrators and trustees, university representatives, legislators, and members of the Kansas Board of Regents staff.  They heard from Rev. Dr. Jamie Washington, President and Founder of the Washington Consulting Group who had earlier conducted a workshop on inclusion.

Cooper carries a 3.8 grade point average as a psychology major.  A native of Manhattan, she is the Leadership Officer for the Highland chapter, a cheerleader, a participant in theatre productions, and serves as a Student Support Services academic tutor.  A member of the Dean’s List, she plans to attend Kansas State University next year.

Muoh holds a 3.9 gpa in pre-engineering. He is serving as the President of the Highland PTK Chapter, a Five Star Member, and a Global Leaders of Promise Scholar.  In addition, he is a student tutor, resident assistant in campus housing, a Cystic Fibrosis volunteer, and on the President’s Honor Roll.  From the Benin Republic in Africa, Muoh is currently running for a PTK International officer position which will fill his coming year.

A native of St. Marys, Stenek has achieved a 4.0 grade point average at the Wamego Center and is the Vice President of that PTK Chapter.  A science major, Stenek plans to transfer to Kansas State University in the fall.  While at Highland, Stenek has been a member of the President’s Honor List.

Phi Theta Kappa is the honor society for students attending community and two-year colleges. Membership is based on high grade point averages and other criteria, with members focusing on scholastic achievement and service to community and campus. These 54 student scholars are part of a statewide student body of more than 123,000 students enrolled at the 19 Kansas community colleges.

Each scholar was selected by his or her own community college for the annual statewide academic team, and was presented with a medallion, certificate, and scholarship awards from the Presidents’ and Trustees’ organizations at the Luncheon.  Each scholar also is a nominee for the 2017 All-USA Academic Team, sponsored by the newspaper USA Today, Phi Theta Kappa, and the American Association of Community Colleges. First team members will receive a $2,500 stipend and will be featured along with second and third team members in USA Today. Names of the students will be placed on the Society's website, www.ptk.org.