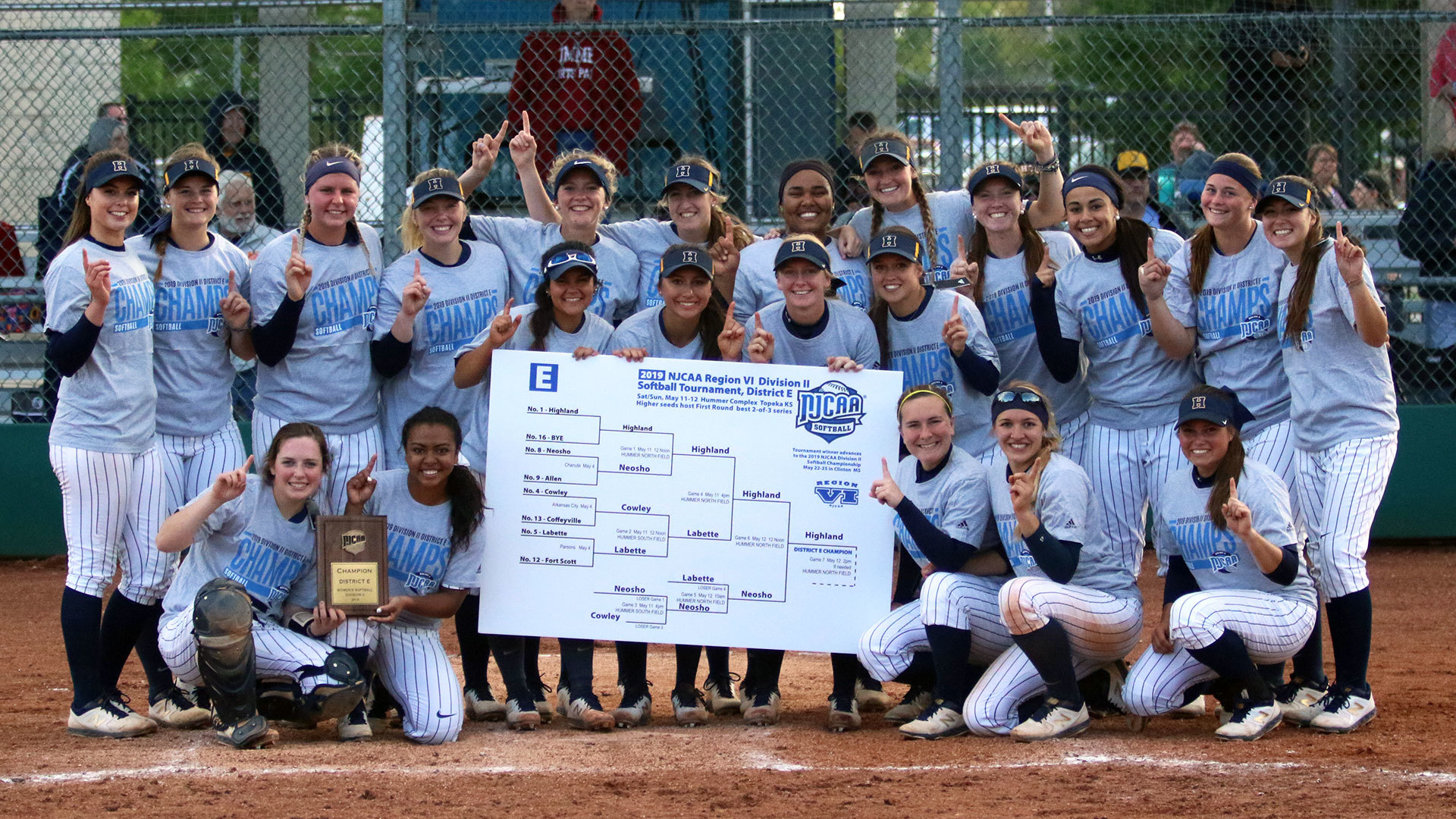 Behind a 3-0 weekend in Topeka, Kansas the #5 Highland softball team earned a trip to the NJCAA Division II National Tournament in Clinton, Mississippi by winning the Region VI District E Tournament title.

The Scotties opened the weekend with a grind it out a 6-4 win over Neosho County and then blanked Labette 4-0 in the second game on Saturday to move into the Championship game. One win away from the Region VI District E title Highland faced off with Neosho County again and this time picked up the 5-1 win to earn one of the 16 bids to the National tournament. Scotties are headed to Nationals for the seventh time under Head Coach, Heidi Jordan and Associate Head Coach, Scott Jordan, making the trip for the first time since 2016.

Game 1 vs. Neosho County (Saturday) – Won 6-4
Highland found themselves down early to open the weekend falling behind 1-0 in the Top of the first inning to Neosho County as the Panthers used a leadoff walk and a Scottie error to tally in the first run of the game.

Scotties responded nicely in the bottom of the second as McKinley Jeanneret with two-outs notched a triple and then ultimately came into score on a wild pitch to tie the game. Highland was not done in the second after tying the game as Sirena Salazar drew a walk and then Cassidy Greer and Isabella Konieczka each recorded RBI singles back-to-back to bring in a pair of runs making it 3-0 Highland. Neosho County tied the game up in the top of the third by scoring a pair of runs, but Highland had another answer scoring three runs in the bottom of the third on RBI singles by Jeanneret and Konieczka, while Greer brought in a run reaching on an error.
Leading 6-3 the Scotties continued to hold Neosho County at bay and the Panthers were able to only score one more run over the course of the contest coming in the fifth and Highland picked up the 6-4 win.

Bailey Lacy led the way in the circle earning the win tossing all seven innings giving up four runs on four hits and four walks and struck out four. At the plate Greer went 1-1 with two RBI's, a walk and reached on an error, Jeanneret was 2-3 with a triple, two runs scored and an RBI and Konieckza posted a 2-3 game with a walk and two RBI's. Salazar scored a pair of runs on a hit and walk, while Chevelle Sartin went 2-3 with a walk.

Game 2 vs. Labette (Saturday) – Won 4-0
After the win over Neosho County, the Scotties looked to position themselves in the Championship game and standing in their way was Labette who also won their first game on Saturday. The contest would prove too highlighted by the pitchers and the defense but Highland was able to manage enough offense to score four runs and earn the 4-0 win.

Kelly Uthe was as tough as nails inside the circle in the contest shutting down Labette with regularity as she surrendered only two hits in the contest giving the Cardinals only two base runners on the day. The game was scoreless overall until the fourth inning when Highland broke through as Alyssa Wesley drew the leadoff walk, stole second and then scored on an RBI single by Hannah Schmidt making it 1-0 in the fifth inning. Scotties tacked on two more in the sixth working the bases loaded and then again Schmidt delivered this time with a two-RBI single making it 3-0. An RBI double by Alexis Hodapp gave Highland an insurance run in the top of the seventh before Uthe set Labette down in order in the bottom of the seventh inning for the 4-0 win.

Uthe was phenomenal in the contest tossing a complete game shutout giving up just two hits in the contest for the win. Schmidt led the offense with a 2-3 game with three RBI's, while Hodapp went 2-4 with a double and RBI.

Game 3 vs. Neosho County (Sunday) – Championship – Won 5-1
After a 2-0 showing on Saturday, the Scotties found themselves needing only one win to claim the Region VI District E Tournament title and after Neosho County beat Labette in an elimination game to open the action Sunday it was another showdown with the Panthers for Highland and the Scotties earned the 5-1 win.
After two innings of scoreless action, Highland took the lead in the bottom of the third plating three runs as the Scotties led the inning off with a single and walk, and then with one-out Alexis Hodapp notched a two-RBI single. Hodapp ultimately came around to score also as Kami Zimmerman put a ball in play for an RBI double giving Highland the 3-0 lead. Scotties tacked on two more in the fourth with an RBI double by Chevelle Sartin and sac-fly by Hannah Schmidt making it 5-0.

Kelly Uthe who started the contest continued to stymie the bats of Neosho County all the way into the seventh inning but the Panthers broke through and used back-to-back hits to open the seventh to get a run. Bailey Lacy entered the game for the Scotties in the circle and while the bases were worked loaded with the tying run at the plate Lacy got the three outs needed as a flyball out to center field finished the game lifting Highland to the 5-1 win.

Uthe picked up the win tossing six innings giving up one run on six hits and a walk while striking out four and Lacy earned her third save of the season recording the final three outs in the circle. At the plate, Bella Konieczka was 2-4 with two runs scored and a stolen base, while Sartin was 1-2 with a double, run scored, walk, hit by pitch and RBI. Zimmerman added a 2-2 day with a stolen base, RBI and hit by pitch.

The 3-0 performance by Highland moved the Scotties to 33-10 on the season and earned them the Region VI District E Tournament title and a trip to Nationals for the seventh time under the guidance of Head Coach, Heidi Jordan and Associate Head Coach, Scott Jordan.

To learn more about Highland Community College athletics and the upcoming trip to nationals visit www.scottiesathletics.com

Nationals will be held in Clinton, Mississippi on May 22-25.