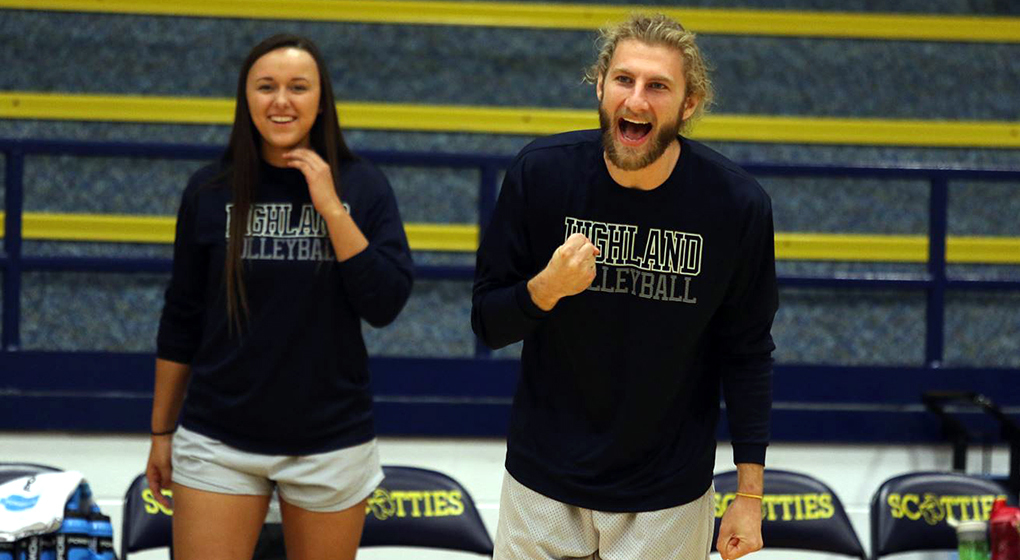 The Highland Community College volleyball team enjoyed a historic year that included their first KJCCC title since 1996 as they captured a share of the KJCCC East title after finishing 34-3 on the year and 9-1 mark in KJCCC play.

Head Coach Jon Bingesser, who just wrapped up his fourth year leading the Scotties, has steadily increased their win total over his four seasons and turned the program into a top tier KJCCC team. In addition, Bingesser has transformed the Scotties into a Nationally ranked top team reaching their highest ranking in school history at #3 in the nation last year.

For all his success Bingesser has been recognized by the American Volleyball Coaches Association as part of the Thirty Under 30 list which recognizes up-and-coming volleyball coaches 30 years old and under at all levels of the game. Jon is the only NJCAA coach to be recognized on this year's list.

"Receiving this award is a great honor for me because it represents the hard work and dedication that has been put into the last ten years of my volleyball coaching career," said Bingesser.

Bingesser, after leading the Scotties to a 34-3 record this past season and earning a KJCCC East title, also earned KJCCC "Coach of the Year" in the East Division and his team hosted Districts for the second straight year. During his four years as Head Coach at Highland, he has amassed a record of 108-42.

He has totaled a 41-10 record at home and 25-12 mark in Conference play while having 12 players earn All-Conference honors, one KJCCC "Player of the Year", 13 All-Region players and two All-Americans during his four years. He has sent 12 players to four-year universities during his time at Highland.

Sports has been a constant for Bingesser. Growing up with a family of coaches and former collegiate athletes, he developed a love for the sport of volleyball because of its fast-paced nature and intensity level. Getting his start in Arma, Kansas at Northeast High School, Bingesser then served as a Head Coach at Hoisington high school and with several club teams before taking over at Highland. While coaching at the varsity high school level he totaled over 100 wins, won two conference championships, two sub-state championships and took fourth place at state in 2013 at Hoisington in the Kansas State 3A Tournament.

"The opportunity that Highland has given me has been hugely impactful in my life and has helped me earn recognition at the National level from the AVCA while making me a better coach. The support system has been phenomenal at Highland and allowed me to not only impact the program and take it to the heights that we've achieved over the past four years but also push me to become an even better coach and grow in the sport I love. I look forward to what the future has in store for my coaching career at Highland and beyond and hope to continue to take the Highland program to new heights in the years to come," said Bingesser when asked about how being Head Coach at Highland has impacted his life.