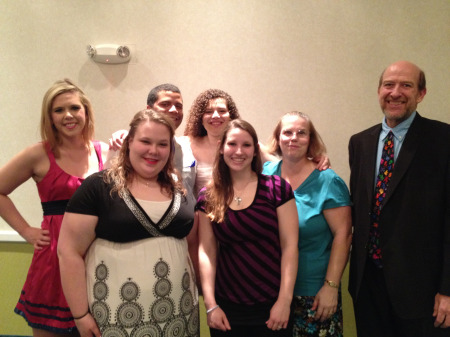 Members of the Alpha Zeta Gamma chapter of Phi Theta Kappa (PTK) – the academic honor society of the two year college – on the campus of Highland Community College attended the PTK Kansas Region Convention held at Kansas University, March 7-9.  The chapter advisors and five students revived the Highland chapter’s presence on the regional level after a period of inactivity.

The Highland chapter advisors -- mathematics instructor Margy Heddens and biology instructor Harry Moeller – volunteered to lead the chapter and make the improvements in the level of involvement, which pays dividends in the level of chapter achievement.  The five chapter members who accompanied Heddens and Moeller to Lawrence were Erin Clary (Troy) – Chapter President, Terri Simmons (Highland) – Public Relations Officer, Mackenzie King (Topeka), Thaina Dos Santos (Topeka), and Deondre Harris (Atchison).  Regional Awards were given during the conference, and the Highland chapter was able to see the progress it has made.  Not only did the chapter receive recognition, individuals received awards as well.

Chapter recognition included a certificate of appreciation for their contribution in hosting the 2014 Kansas Region Convention; award for  reaching a Three Star Level in the Five Star Chapter Plan; Honorable Mention in the Service Award category which recognizes the service projects developed and successfully implemented by a chapter within the Kansas Region; Honorable Mention in the Great Idea Award category which recognizes and honors a new Great Idea for an activity, event, project, or promotion developed and successfully implemented by a chapter within the Kansas Region; Litterae – Kansas 2014 – inclusion of a poem by chapter member Kayla Bales (Muscotah) which was one of fifteen PTK student works in the Kansas Region Achievement in Literature Awards; and the Horizon Award which is selected by the Regional Coordinator to recognize advisors who may be new and/or have contributed significantly at the regional level – Heddens and Moeller received this award.

Chapter member Mackenzie King also exhibited her quest for involvement and leadership by being a candidate for Vice President of the Northern District.  She was aided by Thaina Dos Santos as her campaign manager.  It has been a long time since the Highland chapter has had this type of recognition and the participants had a great time at the conference.