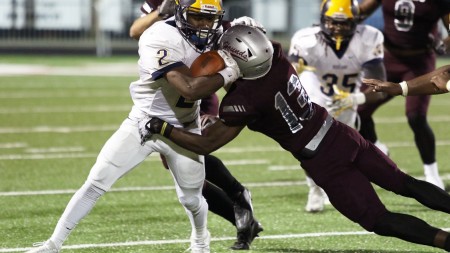 
Sophomore running back Marquis Terry (Atlanta, GA) earned his fourth KJCCC Offensive Player of the Week award after another dominating performance last Saturday at Fort Scott. Terry rushed for 231-yards on 38 carries and two touchdowns. He also added one reception for 12-yards. His performance on Saturday put Terry over the 1,000-yard mark this season to become the first Highland rusher to 1,000 yards since Jermaine McDowell in 1994. The HCC record for rushing yards in a season is held by Jermaine McDowell at 1,430.

Sophomore safety Antonio Cole (Edmond, OK) earned his first KJCCC Defensive Player of the Week award after his performance in the secondary last Saturday at Fort Scott. Cole recorded seven total tackles and two interceptions in Highland's 20-17 victory. He returned the interceptions for a total of 50 yards.

His second interception came with 1:35 left in the game as Fort Scott was moving the ball inside the Highland red zone. Tyrik Carmickle (Junction City) broke up a pass up the middle and Cole came down with the pick at the Highland 15-yard line and brought it to the 33-yard line, sealing the victory for the Scotties. Cole has totaled 40 tackles, one forced fumble, and three interceptions this season.

The Scotties are 6-3 overall and nationally ranked 18th. They play host in their last home game of the season to Coffeyville on Saturday, November 5, at 1:00 pm on Kessinger Field.