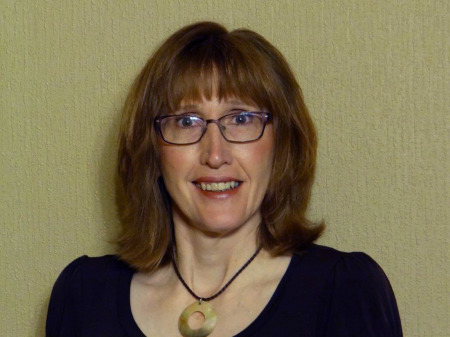 The Highland Community College Athletic Hall of Fame Committee is pleased to announce its 2015 candidate for induction into the Hall of Fame:  Thelma Schmitz Strathman.

In 1981, a standout student athlete from B & B High School (Baileyville), Thelma Schmitz Strathman chose to continue her academic and athletic careers at Highland Community College.

Strathman enriched her talent in both volleyball and basketball under the leadership of veteran coaches Glenna Batchelder in volleyball and Marty Allen in basketball.  Her athletic ability and team leadership helped pave the way for both programs to continue Scottie success.  The 1981-82 basketball team recorded a 21-9 season.  The 1982-83 volleyball team went 21-13, winning the NJCAA Region VI Independent Volleyball Tournament, and Thelma received selection to the NJCAA Region VI Volleyball Team.

Academically, Strathman was a NJCAA Academic All American both years, and a member of Phi Theta Kappa National Honorary Scholastic Society, plus a member of Who’s Who in American Colleges.

Strathman’s career as a high school volleyball coach and math instructor has been recognized with the following accomplishments:

Who’s Who Among America’s Teachers

Strathman commented that, “With a wonderful coach, a great group of teammates, and the support of the entire Highland community, I couldn’t have asked for a better college experience.”

The 2015 induction will take place on Saturday, September 19, in the Walters Wellness Center on the Highland campus.  Along with Strathman’s induction, there will be a reception for and recognition of the 1982 Scottie Volleyball Team which was the NJCAA Region VI Independent Tournament Champions.

Activities will begin with registration at 9:30 a.m. in the Walters Wellness Center.  Strathman’s induction will begin at 10:30 a.m., followed by the recognition of the 1982 volleyball team and a luncheon at 11:30 a.m.  Those assembled will then convene in the Barber Room of the Scottie Stadium Center for a reception and to watch the Scottie football team host Ellsworth (IA) Community College with a 1:00 p.m. kick-off on Kessinger Field.  Strathman and the 1982 team will then be recognized again on the field at half-time of that game.

Those wishing to attend the Hall of Fame induction and recognition of the 1982 team are encouraged to reserve the $6.00 luncheon tickets in advance by contacting Athletic Administrative Assistant Darla Tracy at 785-442-6040, or dtracy@highlandcc.edu.  Payment for the luncheon can be made during the 9:30-10:30 a.m. registration.