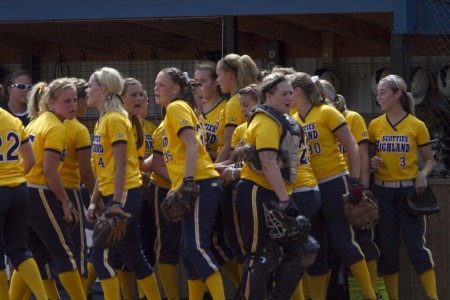 The Scottie softball squad completed another successful week on the diamond by going 7-1 last week. Highland opened the week’s action with four games against KCK and Neosho County at home before hitting the road for a big weekend series against Hutchinson and Hesston. The week started off a little rough as the Scottie’s struggled in the first game against KCK, falling by a score of 5-1. Highland then rebounded nicely and won the second game 7-0.  Zuzana Kudernatschova (Czech Republic) took the first game loss and Katie Slibowski (Lathrop, MO) pitched a three hit shutout in the game two victory.  Baylee Dillon (Grapevine, TX) and Jessie Troupe (McLouth) both homered for Highland in game two.

On Tuesday, Highland made quick work of the visiting Neosho County team, sweeping the double header 5-2 and 10-2. Kudernatschova and Slibowski received the wins on the mound for the Scotties, combining to give up only six hits while striking out sixteen Panther batters. The offense was led by Megan Plouvier (Shawnee) going a combined 3-4 with three walks, three RBI’s, five runs, and her first career homerun. Kudernatschova was also 3-3 in game one and McKenzie Knight (Tonganoxie) was 2-3 in game two.

Highland’s weekend series began with a tough matchup at Hutchinson. The Scotties got off to a slow start, but the combination of good hitting and great pitching was too much for Hutchinson to handle as they fell to the Scotties 7-0 and 6-1.  Kudernatschova got the game one win, giving up no runs on only four hits. Slibowski picked up the game two victory, allowing one run on four hits.  Kayla Gritt (Arlington, TX) led the offensive charge for Highland, collecting four hits on the day.

The final matchup for the week was with Hesston College.  The Highland defense would once again take control to sweep another double-header by scores of 3-0 and 7-0. Kudernatschova struck out fourteen Lark hitters en-route to her fifteenth win of the season in game one. Skyler Gentry (Fort Worth, TX) and Kayla Gritt had three hits each for the Scotties. In game two, Katie Slibowski picked up her eighth win of the season in a three hit shut-out performance. Megan Dortch (Kearney, MO) went 3-5 with a double and a triple, and Baylee Dillon went 4-5 with three doubles in the game.

Coach Heidi Jordan is very optimistic that her team is headed in the right direction to peak at the right time. “I am very excited about our performance this week, particularly on the defensive side of the game. We are getting great outings from our pitching staff right now and that is leading to increased confidence on offense.”  With last week’s solid performances, Highland improves to 17-3 in region play and 29-9 overall.