Orville the Owl to Get Care from HCC 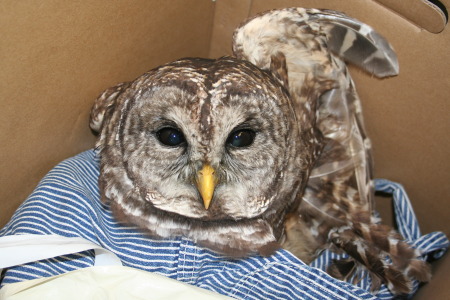 Orville the Owl to Get Care from HCC

Usually, you hear about a deer that has run in front of or into a car.  For Highland Community College employee Kevin Burleson, it was an owl.  As a result of that collision, Orville the Owl – as Burleson named the wounded bird – ended up with a broken wing.  Burleson quickly checked on places he could take Orval to repair his wounded wing and discovered OWL (Operation WildLife, Inc), an appropriately named organization in Lindwood.  In exchange for taking care of Orville, OWL asks for financial support in the form of donations from interested parties.  Those interested can donate via PayPal at http://owl-online.org/donate.html.

Operation WildLife, Inc (OWL) was founded in 1989 and is the only organization in the area to help orphaned, injured, and displaced wild animals throughout the metropolitan area.  Each year OWL cares for 4,000 to 5,000 wild animals and fields over 35,000 phone calls from members of the general public.  OWL covers 4,500 square miles or approximately nine Kansas counties.

Staffed entirely by volunteers, OWL doesn’t charge any fees for its services.  The organization doesn’t receive funding from any city, state, or federal governmental entities, sales tax, or United Way.  Funding is derived from donations and memberships, and they depend upon the generosity of the general public to survive.

UPDATE:  Orville is actually Orvillina, and she is a Barred Owl, better known as a hoot owl.  Ovillina was delivered to OWL and is under observation to determine how severe her internal injuries are.  She was treated for shock and given antibiotics.  She is scheduled for radiology today.