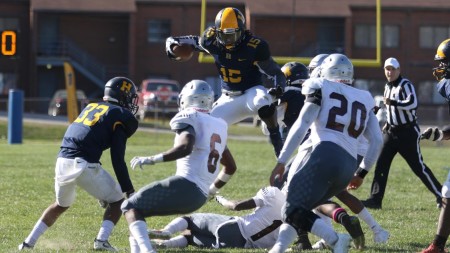 Highland football got back on track last Saturday as the Scotties defeated Fort Scott in overtime 27-21 in the annual Hall of Fame game. The Scotties came out swinging in the first quarter, using a strong running attack to score two of their four touchdowns of the day.

Willie Jordan (SO, Warner Robbins, GA) set the tempo out of the Scottie backfield with a 60-yard rush in the first quarter, setting up a Naricuss Driver (FR, Griffin, GA) three-yard rushing touchdown, giving Highland the 7-0 lead.  After forcing a Greyhound punt, Tra Barrett (SO, Valdosta, GA) broke off a spectacular 71-yard punt return, giving Highland a 14-0 lead with 4:54 left in the first quarter.

Highland cooled down in the windy cold for the next two quarters as Fort Scott started to find its rhythm on offense. The Hounds pieced together a 12 play 71-yard touchdown drive early in the second. Late in the third, Fort Scott again marched the length of the field and tied the game at 14.

A Damarion Williams (FR, Atlanta, GA) interception set up Highland with a short field early in the fourth. Quarterback Naricuss Driver bounced off two defenders and hurdled another as he made his way into the end zone, scoring on a 21-yard rush. Fort Scott answered a few possessions later, tying the game at 21 with 4:51 to play.

Each team would get two more possessions, and great punting from Lane Spiker (FR, Highland) pinned the Hounds deep in their own territory and they were unable to move the ball as regulation came to an end.

Fort Scott had the ball first in overtime. Three plays in, the Hounds’ backup quarterback bobbled the snap, and Loren Young (FR, Atlanta, GA) of the Scotties came up with the recovery. Highland stuck to the ground game in overtime, with Driver and Jordan handling the ball. Jordan battled through defenders, getting the ball to the 4-yard line. That set up Driver's third rushing touchdown of the day and the winning touchdown for the Scotties. Highland won 27-21.

On the defensive side, Jeremiah Hill (SO, Cairo, GA) once again led the Scotties in tackles, this time with 18 total. He had 1.5 tackles for loss, a quarterback sack, and a pass breakup. Reco Hannah (FR, Randolph Clay, AL) recorded 11 tackles with a pass breakup. Loren Young added 10 tackles, 2.5 of them for a loss, and a fumble recovery.

The Scotties go on their final road trip of the season this Saturday, November 4th, as they travel to Coffeyville to take on the Red Ravens in a 7:00 pm game at Veterans Memorial Stadium.