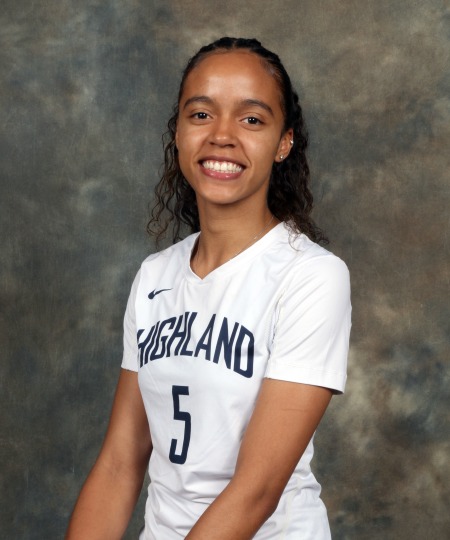 Polanco earned her second straight All-Conference recognition after being an honorable mention selection last season. The six rotation standout has made her way into the HCC record books as #1 All-Time in most kills and digs in a single season and in her career. She finished with 563 kills and 634 digs this season; 855 kills on her career along with 1,092 digs. Polanco was picked twice for KJCCC DII Athlete of the Week, was named to two All-Tournament Teams, and finished with 26 double-doubles on 47 games. She ended 1st in the Conference and 4th in the NJCAA in kills, 8th in service aces (45), and 6th in digs. "I am very proud of how far we made it this season. It was exciting being able to host Districts here and to make so many accomplishments as a team and individually. I worked so hard this season to do what I can to help my team win, and it felt good having such a good support system from my family and the people here."

Pearson, a freshman setter from Kansas City, MO, has left her mark as a Highland Scottie this season, becoming the #1 All-Time HCC single-season setter with 1,433 assists. She was awarded KJCCC Player of the week two different times and was named to two All-Tournament Teams. Pearson ended 3rd in the KJCCC and 5th in the NJCAA in assists. She picked up 328 digs, had 46 kills, 29 aces, and 48 total blocks to support her outstanding season. "When I found out about the post season honors, I was really happy for myself that I could accomplish that as a freshman, and it feels good that my hard work paid off. It has been a pleasure to be a part of a program that achieved so much and that we finished the way we did."

Kleitz had a breakthrough year as one of the Scotties’ middle blockers. She worked her way up to 5th in the HCC All-Time single-season blocking list with 102. Kleitz ended the season 6th on the KJCCC Leader Board in total blocks; 4th in solo blocks. She is also top 10 in kills, kills per set, and points. Kleitz was named to two All-Tournament Teams and led the Scotties with a hitting percentage of .255 along with picking up 141 digs. "It means a lot seeing that what I worked on all last year and throughout this year has paid off. Finishing where I did in the Conference and getting those awards really justified all the hard work and made it worth it. I am really proud of the girls and myself this season. We really made a new name for Highland, and I am glad I got the chance to be a part of such an incredible group."

Orozco, the Scotties’ 5'8 right side, rapidly progressed all season to finish with an All-Region honor. She produced seven double-doubles on her career and put down 270 kills, had 326 digs, and 69 total blocks; all ranking her third on the team. Orozco was named to the Triton All-Tournament Team and earned Scottie Athlete of the Week. "Getting the award was very shocking, and I wasn't expecting to receive All-Region, but I am very thankful for the recognition. Overall it was a great season, and I did not expect the team to break so many records. I look forward to continuing my volleyball career after Highland."

Under the mentorship of Jon Bingesser in his third season, nine Scotties have received post season honors, including eight All-Conference and nine All-Region. The team finished 2nd in the KJCCC, hosted the District N Championship Tournament for the first time in 10 years, and the second time in school history, and earned a 30+ win season.

"There is so much pride as a coach to see players receiving Conference honors. It is truly great to see these girls rewarded for their hard work and efforts they put in. Seeing Koie receive All-Region with Zealia was awesome because those two really earned those honors. Katie being voted to the 2nd team as the top setter showed how bright her future is going to be. I am beyond proud and excited for Leslie. Her receiving the highest honor of a Conference player was probably the coolest thing in my time here at Highland. She is truly a deserving recipient."