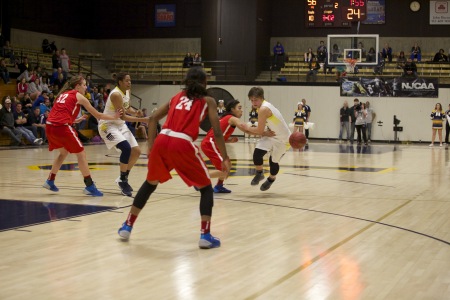 The Highland Community College women’s basketball season concluded by going all the way to the NJCAA Division II National Tournament title game, and ended only after going to overtime.  The final score of 72-82 reflects the hard fought nature of the game and the need for the Scotties to foul a hot-shooting team from Mesa, AZ, which hit their free throws in the final minute of the overtime session.

The Championship game was worthy of the title as the teams battled back and forth the entire game before a crowd that felt like a home game as the Scottie faithful turned out in force for the entire tournament held on the campus of Johnson County Community College in Overland Park.  Highland was led by sophomores Julia Alves (Sao Paulo, Brazil) with 18 and Ryann Bowser (Holton) with 15 points.  Freshman Anna Deegan (Overland Park) had 13, including two clutch free throws to tie the game in regulation.  Alves and Bowser were named to the All-Tournament Team.

This was the second consecutive year the Scottie women reached the National Tournament, finishing fifth last year with another 30 plus win season for Head Coach B.J. Smith and his assistant Jillian Palan, breaking the Highland record for wins in the three years that Smith has been with the Scotties.