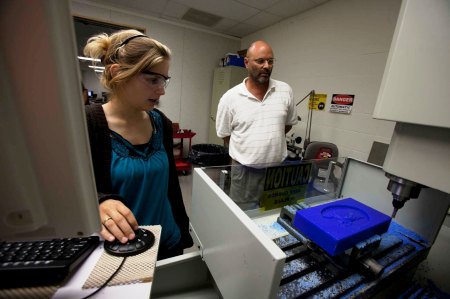 The Computer Aided Drafting (CAD) program at the Highland Community College Technical Center is changing its name to Engineering Graphics and Technologies (EGT). The logic behind the program name change included several factors, including student understanding, current software/information, continuing education, and job descriptions.  The program name change will be fully implemented for the Fall of 2012.

Program coordinator Tim Lauts started to notice that prospective students had little knowledge as to what CAD was as a career, so the students he currently has in the program and the program advisory committee started discussing what could be done to modernize the career terminology.  Their discussions and research found that most of what the CAD program was working on for a career was located in either technology programs or in higher level institutions as a portion of the Engineering Department.  They also found that prospective students, as well as the general public, understand Engineering Graphics and what it represents far more than CAD.  Conducting simple verbal surveys as to the names soon proved that perhaps the program needed to update its name.

Computer software related to careers in CAD/Engineering Graphics is becoming extremely powerful in its ability and intelligence. Software such as Solidworks and Inventor allows the student to go beyond just the normal two-dimension drafting of  CAD work into the areas of assemblies, simulated assemblies, FEA testing, injection molds, mold flow, and much, much more.  Lauts and his team also noticed that texts and other information started referring to titles in Engineering more than CAD, titles such as Engineering Drawing and Design, and Technical Drawing with Engineering Graphics.  Consequently, they found the name for the change right in front of them: Engineering Graphics.

The name change also led student discussions into continuing education and what the program could do to increase their abilities for possible transfer into higher education institutions. The team contacted several institutions with transfer-related questions.  The Benedictine College Engineering Department was very helpful in providing information on the transfer of credit and in the growth of the EGT program Consensus suggestions on transferring and student advising were to get current students into Engineering Graphics:  higher math skills, chemistry, and physics.  Researching equivalency courses with an Engineering goal in mind, the team found many of them are already offered at HCC.  So, a Highland Tech Center student interested in Engineering/Engineering Technology has the opportunity to graduate with core courses that are transferable, along with Engineering Graphics.

Technologies is also part of the new name.  Previously, Lauts decided to increase the program’s abilities by adding a prototyping printer, the ZPrinter, a fantastic new addition that allowed students to actually transfer what they were drawing on the computer screen into a three-dimensional (3D) solid they could see and touch.  The concept was to design a component and examine it prior to manufacturing, teaching students cost and development as well as technology.

Along with the printer, Lauts added a NextEngine 3D scanner to instruct the concept of Reverse Engineering, highly used by Jay Leno and crew in his rare car restoration, reconstructing auto parts that are totally unavailable.  Today the program has added other new pieces to its collection of technology -- a Tormach Mill with a duality lathe and a Syil CNC Lathe.  They also teamed with the Building Construction Technology program to apply for and receive a CNC EZRouter.  The Engineering Graphics and Technologies program will instruct students on the vector graphics and operation of the CNC.  In the future, Lauts hopes to add a small Laser Engraving/Cutting system to the program’s inventory of technologies.

By recognizing the market change and increasing its engineering and technologies focus, the program goal is to increase its students’ knowledge base, prepare students for continuing education, and equip them with the advanced skills needed and required by industry.