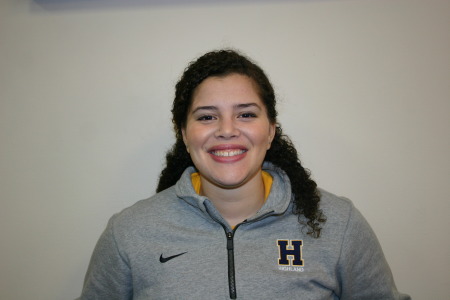 Thaina Dos Santos Jensen, a Topeka sophomore at Highland Community College, is the top scoring student in Kansas for the 2015 Coca-Cola New Century Scholar program.  This program is sponsored by the Coca-Cola Foundation and the Coca-Cola Scholars Foundation, with additional support provided by the American Association of Community Colleges and Phi Theta Kappa. Selection was based on the score earned in the All-USA Community College Academic Team competition, for which more than 1,700 applications were received this year.  A panel of judges made the selections based on their evaluation of the students’ academic achievement, leadership, service, and how students extended their intellectual talents beyond the classroom, specifically the student’s response to a significant endeavor.

As a Coca-Cola New Century Scholar, Dos Santos Jensen will be presented with a $2,000 scholarship from the Coca-Cola Foundation and Coca-Cola Scholars Foundation.  Dos Santos Jensen and the other New Century Scholars will be recognized at the Annual Phi Theta Kappa Presidents Breakfast held during the American Association of Community College’s (AACC) Annual Convention in April in San Antonio, TX.  Additionally, Dos Santos Jensen will be recognized at Phi Theta Kappa’s (PTK) Annual Convention, also in San Antonio.  Highland president David Reist previously made the commitment to provide support for Dos Santos Jensen in attending the AACC breakfast and the PTK Convention.  She will be joined by Highland’s PTK advisors, Margy Heddens and Harry Moeller.

“We appreciate the support of the Coca-Cola Scholars Foundation and The Coca-Cola Foundation to recognize the outstanding academic achievement and leadership accomplishments of these outstanding community college students,” said Phi Theta Kappa’s Executive Director, Dr. Rod Risley. “These scholarships provided by organizations like Coca-Cola make the goal of college completion possible – especially during these challenging economic times.”