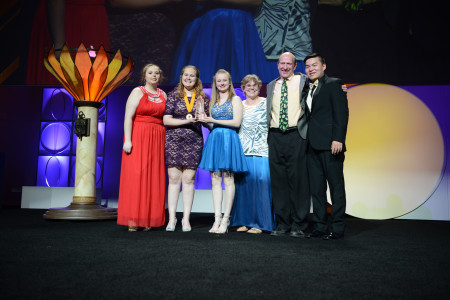 There are around 1,300 chapters in Phi Theta Kappa and only 50 of these awards are given for the Honors in Action project category.  The Highland chapter is also a Top 100 chapter, which is based on its Honors in Action and College projects.  Only one other chapter in the Kansas/Nebraska Region received an International Hallmark Award (Labette Community College for College Project) and only one other chapter in the region is a Top 100 chapter (Coffeyville Community College).  This is a significant achievement for the Highland chapter considering the number of chapters throughout the United States and several countries in the world.

Moeller noted chapter officers Muoh, Wist, Morgan, York, Devon Johnson (Sabetha), Rachel Ellis (Creekside, PA), and member Cailyn Anderson (Troy) did a high level of hard work over the past year that allowed the chapter to receive so many awards.  Moeller and Heddins put in a great deal of time and effort as well.  Also, as an international vice president, Obinna Muoh was a highly visible presence throughout the convention as he moderated, announced, and handed out awards throughout the convention.