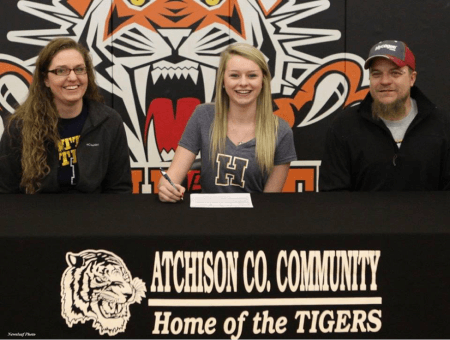 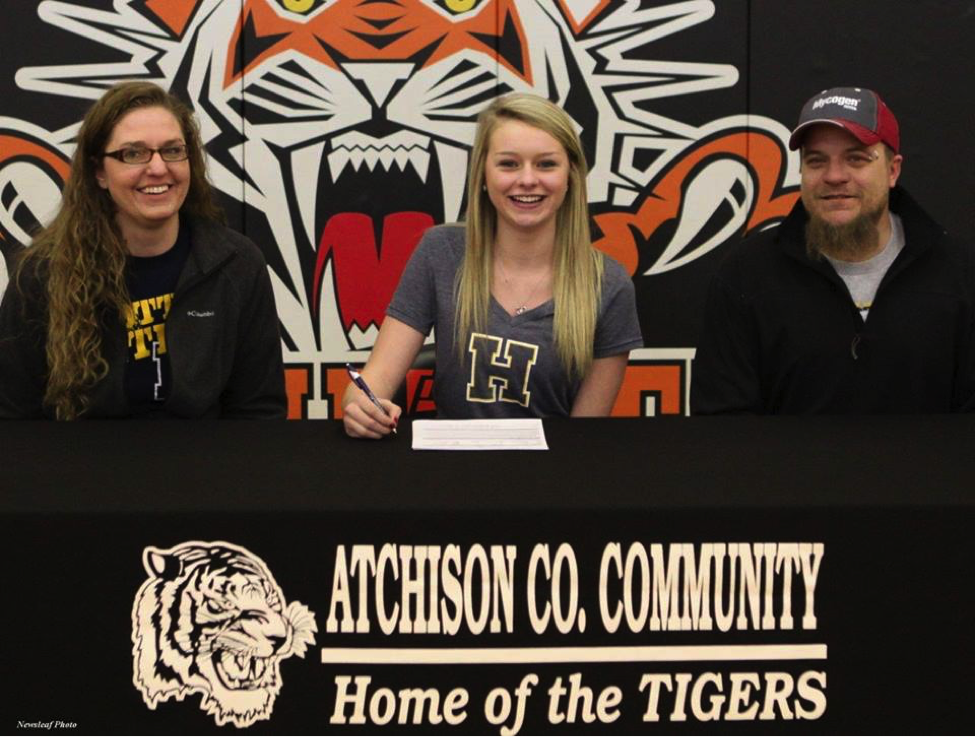 Shailey Caudle joins the Scotties from Effingham-ACCHS.  As an Outside Hitter, she led the tigers in kills and aided in a sub-state runner up finish in 2014.  She was also named 1st Team Big Seven multiple years, was a NEK volleyball all-star, and plays club ball for the Atchison County Attackers.  Her mother Stacey, also played volleyball for the HCC Scotties and was a standout athlete. 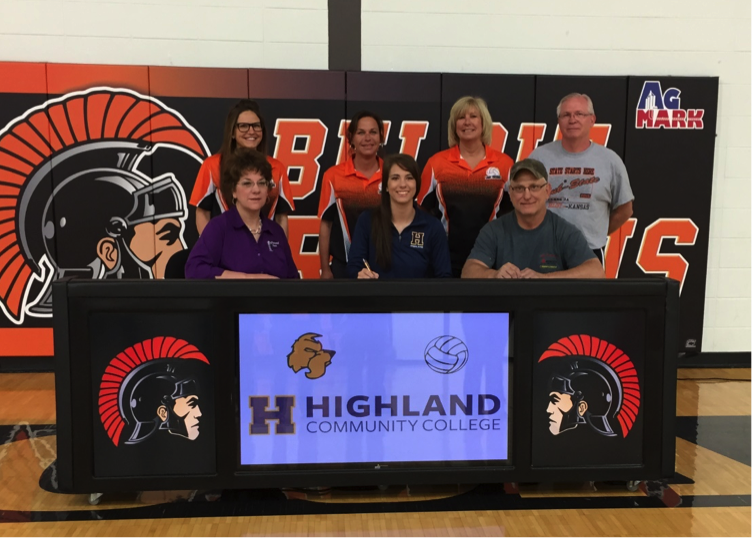 Shaylyn Krone joins the Scotties from Beloit, KS.  As a middle hitter and defensive specialist, she led the Lady Trojans in digs, was named all North Central AA first team, and guided them to a school record finish with the most wins in a single season at 28-9.  Shaylyn is a standout athlete, lettering in 3 sports: volleyball, basketball, and softball, with all league honors in each.  She is also a member of the Central Kansas Volleyball Club. 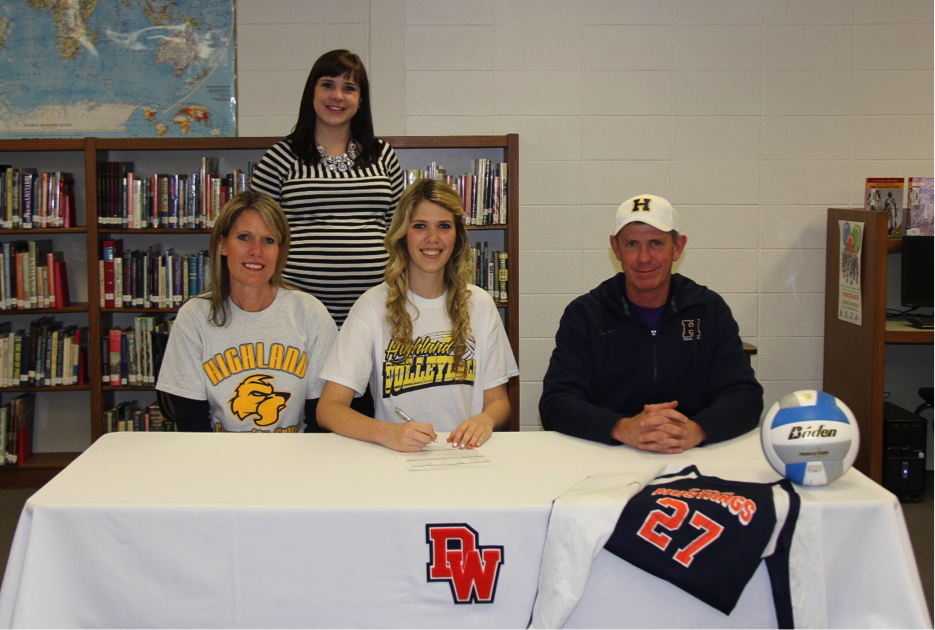 Regan Gibson, native of Highland, Kansas, joins the HCC Scotties from Doniphan West HS.  At 6’1 Regan is a standout athlete and dominating presence, not just in volleyball but basketball as well.  She led her Lady Mustangs in blocks and kills as well as posting Twin Valley league honors in both sports.  Regan’s brother Derek is also a member of the Scottie football team. 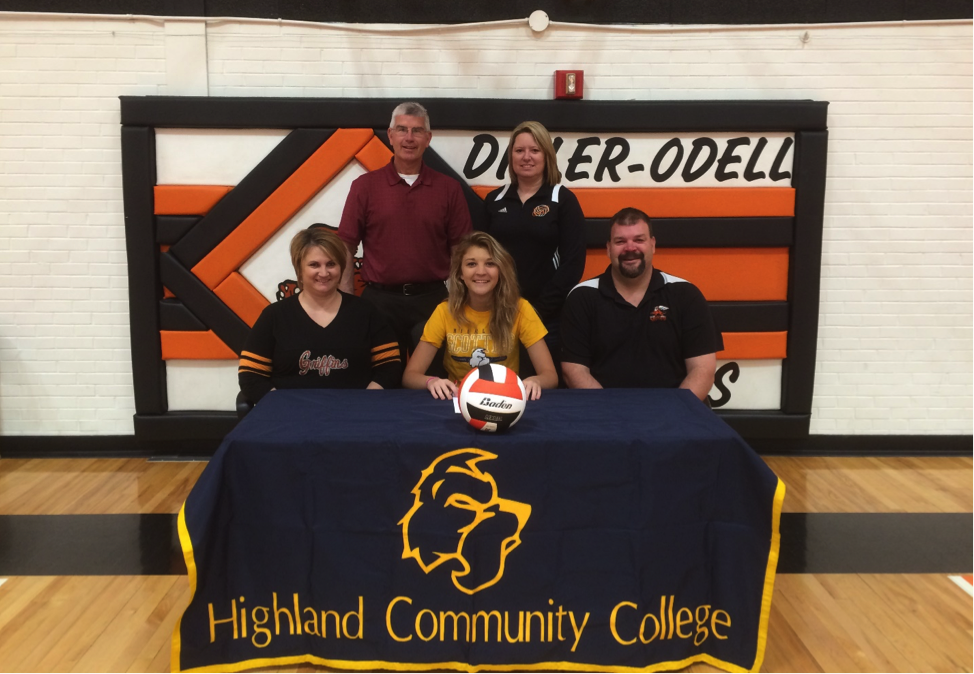 Josie Vitosh comes to Highland from Diller, Nebraska.  As a setter and outside hitter at Diller-Odell High School, Josie led the Griffons to a 29-7 record and a 3rd place finish at the Nebraska Class D1 state championships.  At 5’11, Josie is a stellar athlete and commanding leader; acting as team captain for both the volleyball and basketball teams at DOHS. 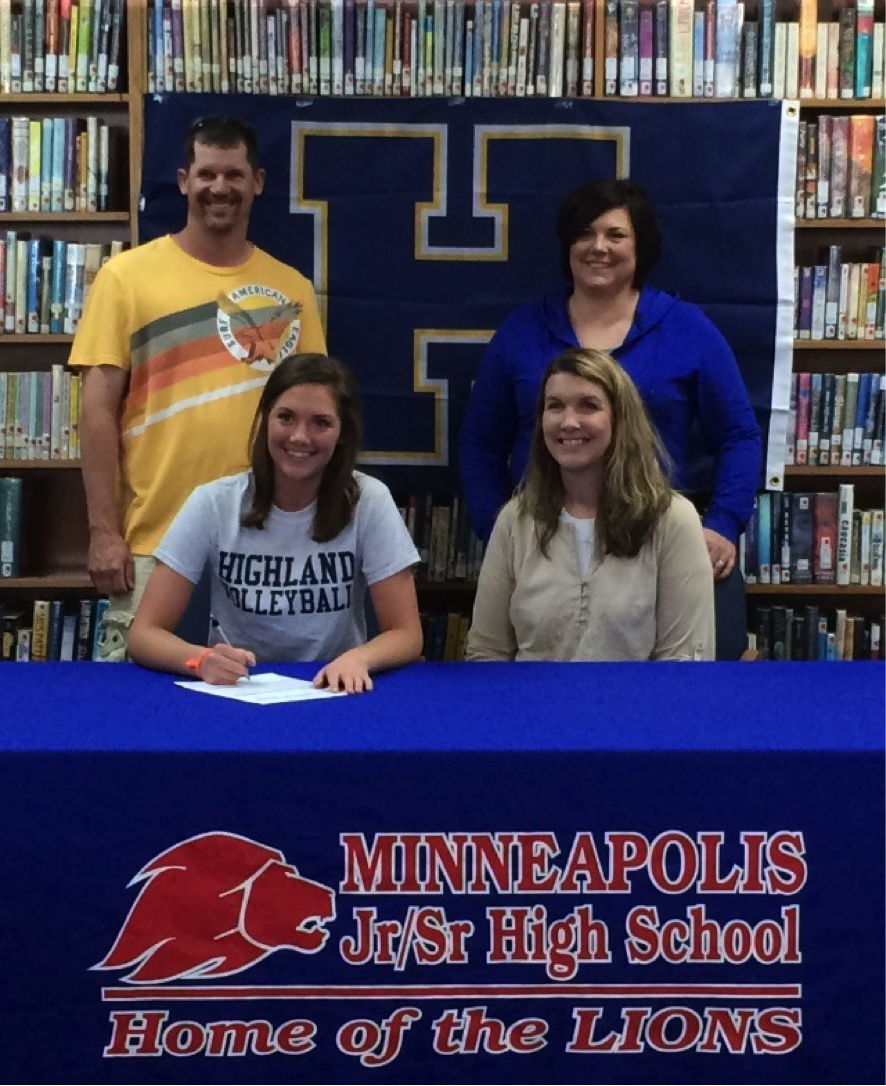 Kylie McKinney, hailing from Minneapolis, KS, joins the Scotties as an outside hitter and defensive specialist.  Kylie led the lions in both digs and kills for the 2014 season.  She has participated in club volleyball since elementary school and is a member of the Lion track team; competing at the Kansas state track meet multiple years.  Kylie is a member of the Central Kansas VBC. 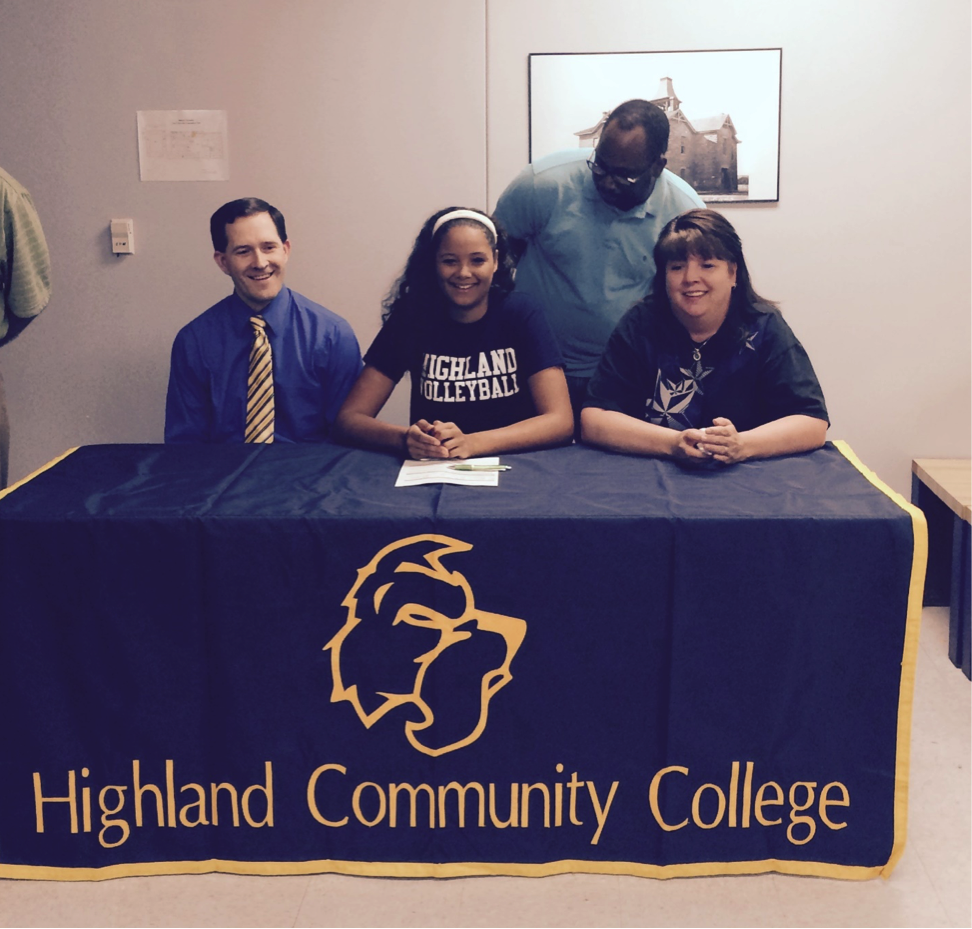 Adrianna Florke will make her way to Highland from Wilson, KS.  While at Wilson, this 6’1 athlete was a standout in volleyball, basketball, and softball.  She guided her lady dragons to several sub-state championships, including an appearance in the 2013 1A state volleyball tournament, as well as a berth in the 2014 Kansas state basketball championships.  Adrianna holds multiple school records, leading the dragons in kills, blocks, aces, and digs.  She also posted a school record in basketball putting up 38 points in a single game this past season.  Adrianna also plays club for the Central Kansas Volleyball club. 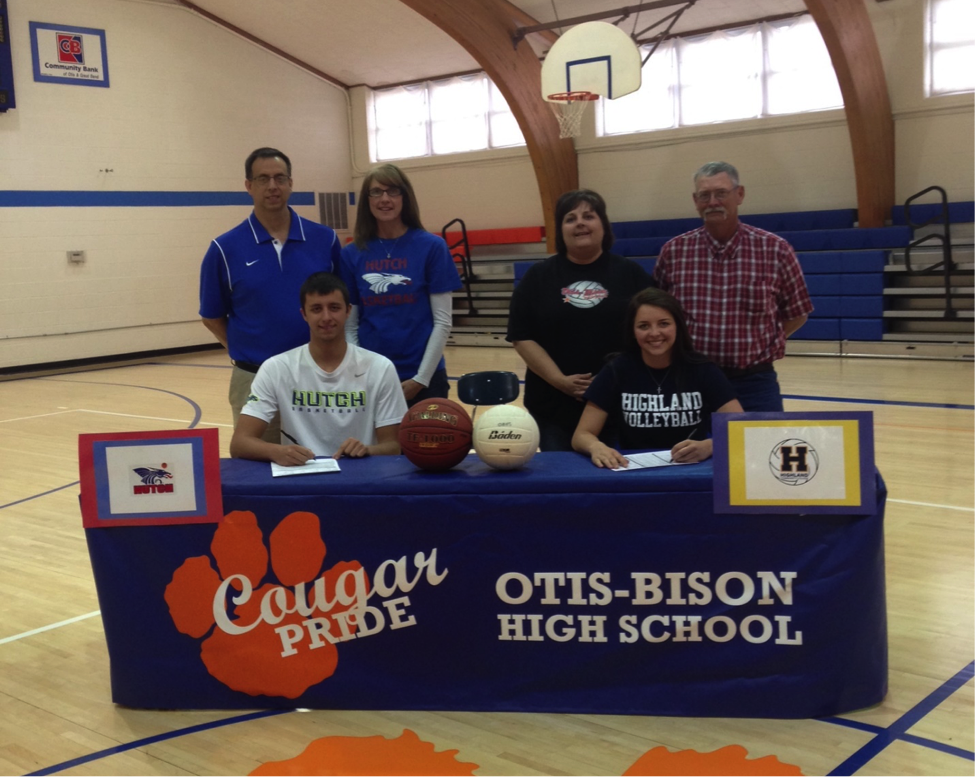 Demi Bartonek joins the Scottie roster from Otis-Bison High School.  During her time with the Cougars, Demi was an exceptional athlete in multiple sports.  Her two most accomplished being volleyball and basketball.  Demi was a four year letterer in both sports and guided the Cougar programs to several sub-state championship games.  Acting as the setter and point guard, Demi led her squads in assists.  Demi is also the libero for the Central Kansas VBC. 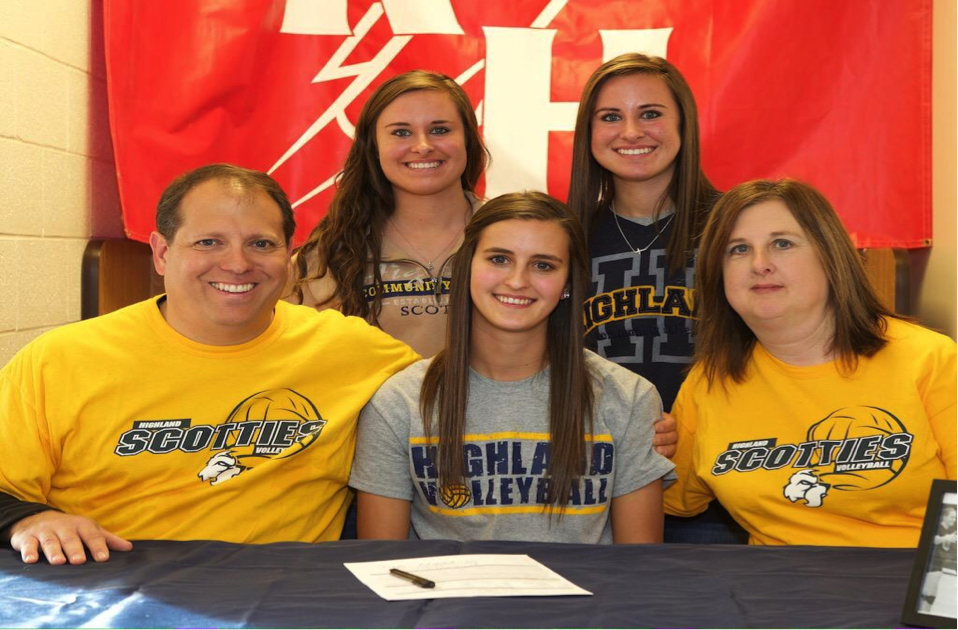 Jocelyn Bollig comes to Highland from Rose Hill, KS.  The Rockets have been a perineal powerhouse in many sports, especially volleyball.  Rose Hill has competed at the Kansas Class 4A Division 1 volleyball tournament for the past several years earning a 3rd place finish this past season.  Jocelyn is also a member of the Rocket softball team whom has also seen success with a regional championship in 2014. 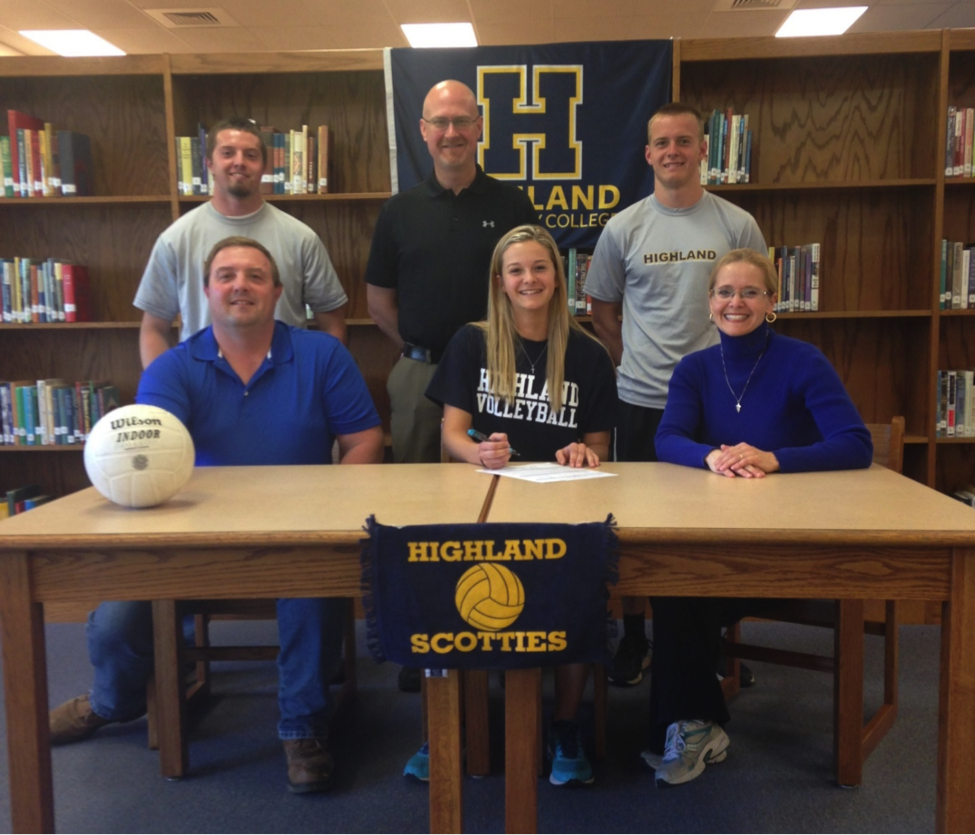 Emily Ebert joins the Highland Scotties from Clay Center, KS.  As a 6 rotation right side for the Tigers, she helped her team to 41-5 record and a Kansas Class 4A Division 2 State Championship title.  Emily is a true athlete also participating in basketball and track for Clay Center.  She aided in a 3rd place finish at the Kansas State basketball tournament; posting a 19-6 record.  Emily has also competed at the Kansas HS State track meet multiple years. 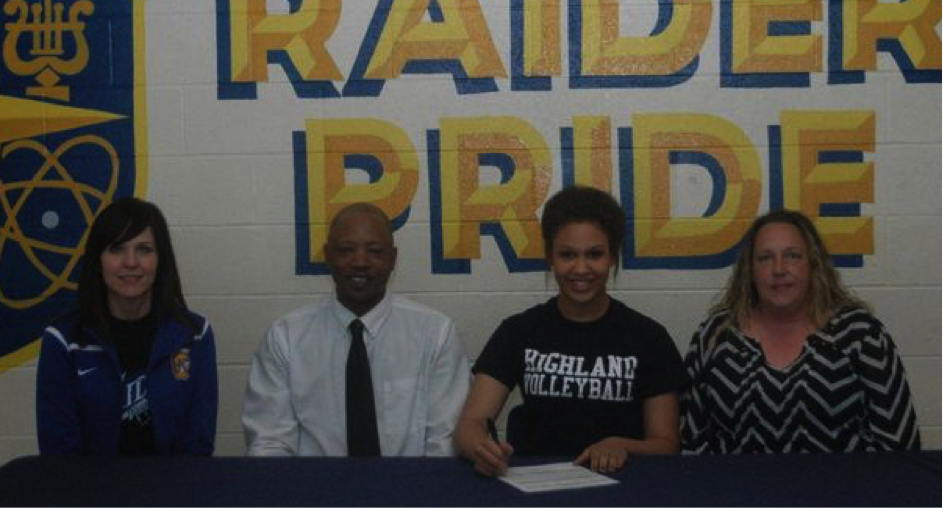 Marianna Falls comes to Highland from Bonne Terre, Missouri.  While at North County High School Marianna participated in volleyball and basketball and was a varsity letterer in both.  This past year she led her lady raider volleyball team to a 25-7-2 finish, ending their season at the district championships.  She also guided her basketball team to a 16-8 record and an elite 8 appearance at the MSHSAA Class 4 tournament championships.  Marianna was a member of the Mineral Area Volleyball Club.