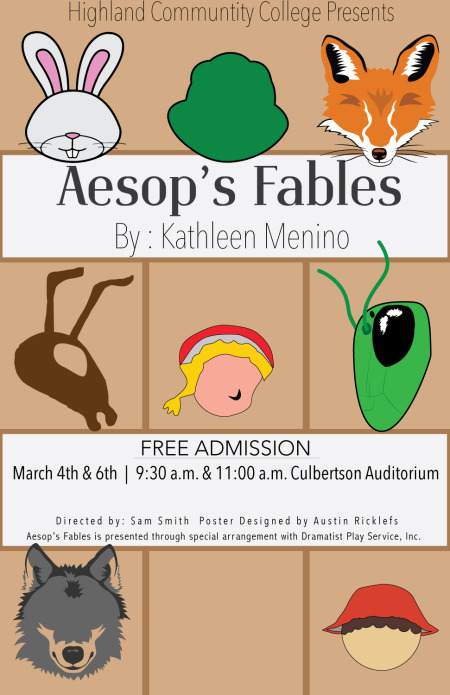 Aesop’s Fables, the time-honored stories that teach basic values, will be the Children’s Theatre production of the Highland Community College theatre department this spring.  Aesop’s Fables by Kathleen Menino are currently scheduled – depending on area school availability – for March 4 at 11:00 a.m., March 5 at 7:30 p.m., and March 6 at 9:30 a.m. in Culbertson Auditorium on the Highland campus.

Admission to these shows is free and the show is recommended for the entire family.  Performances will run approximately 45 minutes. This is an ensemble production, staging a number of Aesop’s Fables, including:

The Ant & the Grasshopper

The Sun & the Wind

The Tortoise & the Hare

The Boy who Cried Wolf

The Fox and the Grapes

The Milkmaid and her Pail

The basic scenario of this presentation of Aesop’s Fables is that Mr. Tortoise and Ms. Hare are holding auditions for a new acting troupe called Aesop's Acting Ensemble. All of the actors are excited to perform the beloved fables, but the pompous acting duo of Dame Patty and Sir Reynard threaten everyone's fun. Will the duo be able to work with the rest of the group as a team? Only the timeless morals of Aesop's tales will help them to make friends and learn their lesson.