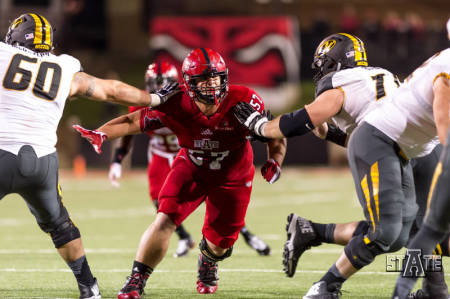 When Jake Swalley was recruited from Overland Park to Highland Community College by former football coach Ryan Held, Held recommended Swalley as a potential Foundation Scholar.  Not only was Swalley a standout on the football field as a defensive lineman for the Scotties, he was a leader on the Highland campus as a Foundation Scholar.  After completing his studies at Highland, Swalley transferred to Arkansas State where he has continued his athletic and academic endeavors, culminating in his recent distinction as one of the William V. Campbell Trophy’s 156 semifinalists announced by the National Football Foundation & College Hall of Fame (NFF).

The Campbell Trophy recognizes an individual as the best football scholar-athlete in the nation. Candidates for the award must be a senior or graduate student in their final year of eligibility, possess a GPA of at least 3.2, have outstanding football ability as a first team player or significant contributor, and have demonstrated strong leadership and citizenship.

Swalley is majoring in general studies, holds a cumulative 3.9 GPA, and is on course to graduate in December of 2016. He has previously been named to the Sun Belt Conference Commissioner’s List, A-State Athletics Director’s Honor Roll, and Arkansas State University Chancellor’s List.

After transferring to Arkansas State, Swalley made an immediate impact for the Red Wolves on the field, helping lead the squad to a 9-4 record, the Sun Belt Conference championship, and an appearance in the New Orleans Bowl in 2015.

The NFF will announce 12-14 finalists for the Campbell Trophy on November 1, and each of them will receive an $18,000 postgraduate scholarship as a member of the NFF National Scholar-Athlete Class, presented by Fidelity Investments. The finalists will travel to New York City for the 59th NFF Annual Awards Dinner on December 6, where their accomplishments will be highlighted in front of one of the most powerful audiences in all of sports. At the event, one member of the class will be declared in dramatic fashion the winner of the 27th William V. Campbell Trophy and have his postgraduate scholarship increased to $25,000.