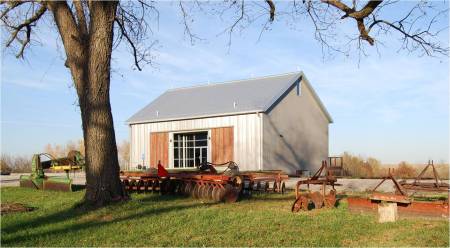 Art associated with the Klinefelter Farm, property donated to Highland Community College by John and Maree Klinefelter, is on display in the Walter Yost Art Gallery on the College campus. The Klinefelter Exhibit will run until April 16 from 9:00 to 4:30 each weekday.

John and Gloria Klinefelter, children of John S. and Elizabeth Klinefelter, grew up on a farm located just east of Hiawatha and bordered by both the new and old Highway 36.  The property was farmed by three generations of the Klinefelter family for over 100 years.  Thus, it became recognized as the Klinefelter Century Farm by the American Farm Bureau Federation.

Neither John nor Gloria had children, and they both became very generous benefactors, including Highland Community College and many other charities and individuals.  John left 640 acres to the College, 160 acres in Doniphan County which could be sold for the College’s benefit, and 480 acres in Brown County to be “operated as a regular commercial farm for the education and training of those individuals seeking a vocation in farming.  A portion thereof may be devoted to experimental or other farm purposes.”

John always wanted to do something special with his farm but didn’t really know how to go about that.  Today, Wendell Ganstrom, Klinefelter Farm Projects Manager, and his assistant, Lindsey Koch, are continually maintaining and improving the Farm’s many features in order to provide numerous educational and cultural opportunities, not only for Highland students but also for all of the surrounding community of Northeast Kansas.

In her will, Gloria Klinefelter Plamann left the College $200,000 to restore the family barn.  Starting in 2010, the HCC Barn Restoration Committee began visualizing how the Klinefelter Barn could be renovated and turned into a conference center.  After a year of planning and meeting with architects, by August of 2012 the barn restoration/refocusing was finished.  All of the renovation costs were paid by Gloria’s gift and from farm income. Since then, the Barn has been the location for many events and functions the College feels will honor the intentions of the Klinefelter bequest.

The art exhibit in the Yost Gallery is an attempt to document “The Klinefelter Farm, Then and Now.”  Special thanks for this exhibit go to the following groups or persons who kindly gave or loaned Klinefelter pictures or memorabilia for this show:  Brown County Historical Society, Eric Oldham, Director; Brown County Genealogical Society; Gus’s Restaurant, Ryan Ramey; Ellen Rogers; Hillis Bowen; John Gernon; and Lenita Lindholm.