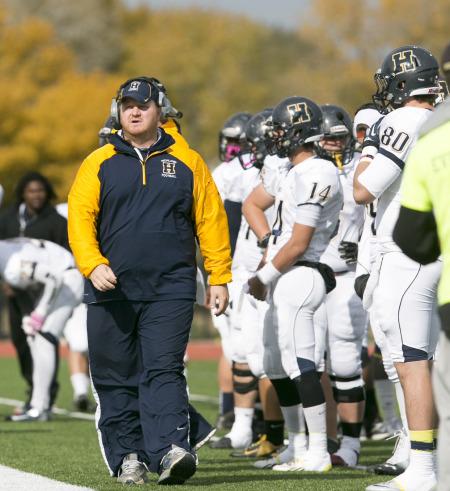 In 2013 Arnold coached an offensive line unit that led the Jayhawk conference in total offense (428 yards per game) and finished sixth nationally in passing offense (301 yards per game). Highland’s high powered offense was instrumental in earning them a playoff appearance for the first time in school history. Arnold’s group protected 1st Team Jayhawk Conference quarterback Brandon Bergeron who broke virtually every major Highland passing record. The 2013 offensive line produced two All-Conference selections. Jeff Travillion earned second team honors at tackle while Avery Richard was an honorable mention selection at guard. Since Arnold’s arrival at Highland, the offense has seen a total improvement of over 285 yards per game and over 14 points per game.

Arnold joined the Highland staff after serving as an assistant strength coach at Texas Tech where he worked under Tommy Tuberville. Prior to his time at Tech, Aaron spent three seasons as a strength coach at Kansas State University under Bill Snyder and was part of the staff that led the Wildcats to the Pinstripe Bowl.

Arnold began his collegiate playing career at Garden City Community College where he served as a team co-captain. In two years at Garden City, he helped lead the Busters to two conference championships, one Region VI championship, the Real Dairy Bowl, and the Valley of the Sun Bowl for the national championship game. His sophomore season he was awarded All Conference honors. He then transferred to Kansas State University where he was part of two bowl teams, the Insight.com Bowl and the Holiday Bowl. While attending Kansas State, Arnold earned his B.S. in Social Science.